Finding New Life on the Water 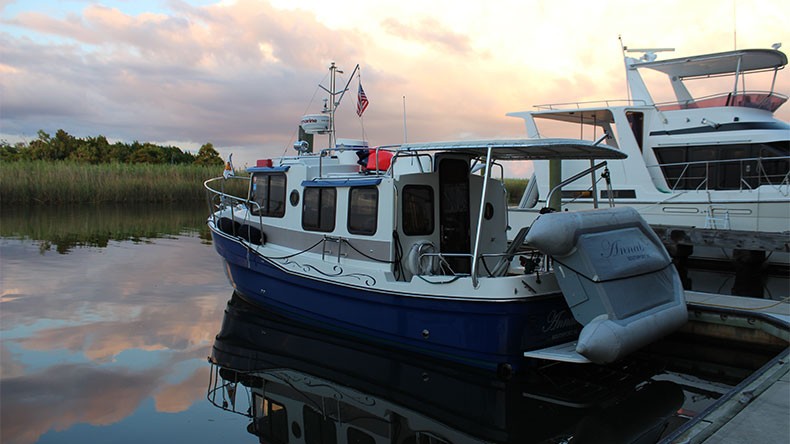 Tanya navigated The Great Loop on her boat, Annabelle, a small trawler equipped with a sleeping berth, galley and bathroom.

After a romantic date in 1996 on a sailboat in San Francisco Bay, Tanya Binford was hooked on boating. But it would be a couple of decades before her real on-the-water adventures began.

“I always dreamed of just sailing away after that first time on a sailboat, but my life certainly took a very different turn in 2014.”

Tanya, who never boated growing up, accomplished what less than 2,000 people have done since the mid-1980s, typically with at least one other person on board. She circumnavigated the Great Loop up the Eastern Coast of the United States, becoming the first female to boat the 5,500-mile route solo. Her six-month journey took her from North Carolina, up along the East Coast and through three of the Great Lakes, south along the Mississippi River to the Gulf of Mexico, around Florida, then back up the East Coast.

“Circumnavigating the Eastern United States has become popular since the late 1990s,” says Kim Russo, director of the America’s Great Loop Cruisers Association, based in Summerville, South Carolina. “But what Tanya has done, especially by herself, is a true accomplishment. She must really have a strong sense of adventure to do such an amazing journey.”

Approaching age 50, Tanya was working as a psychiatric nurse practitioner in Tucson when the death of a dear friend caused her to reassess her life.

“I had too many friends and colleagues who had died before retiring and being able to live their dreams,” she says. “I asked myself, would I have any regrets as I lay on my own deathbed? That was a turning point, and reignited my dream of sailing.” 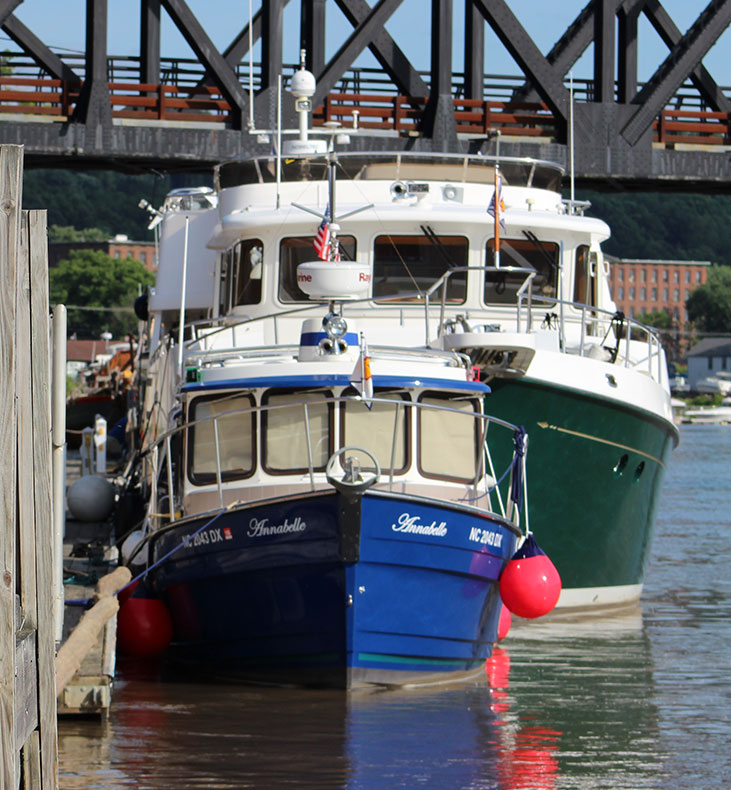 In 2010, it became necessary for her to see patients virtually, freeing her to live wherever she chose. She took the opportunity to move to Southport, North Carolina, with her son.

“I immediately felt at home in Southport, and within a month I’d bought a house. That was the beginning of my journey. My son and I came here to learn about boats.”

Fast forward to 2014. The deal she’d struck with her employer in Arizona several years before allowed her to take a sabbatical for her extended boat trip. Her goal? Navigate The Great Loop on her own boat, Annabelle, a small trawler equipped with a sleeping berth, galley and bathroom.

“It was about right for me, but tight quarters with other people on board,” she says about the 25-foot, 2008 Ranger Tug.

She learned about navigation, general boat maintenance and safety on the water. She also connected with other “Loopers” (people who were in process of doing The Great Loop or had completed it).

“[I met] so many supportive boaters who were willing to share their experiences — good and bad,” Tanya says. “Without connecting with these people, some of whom became my friends along the way, I never would have made it.” 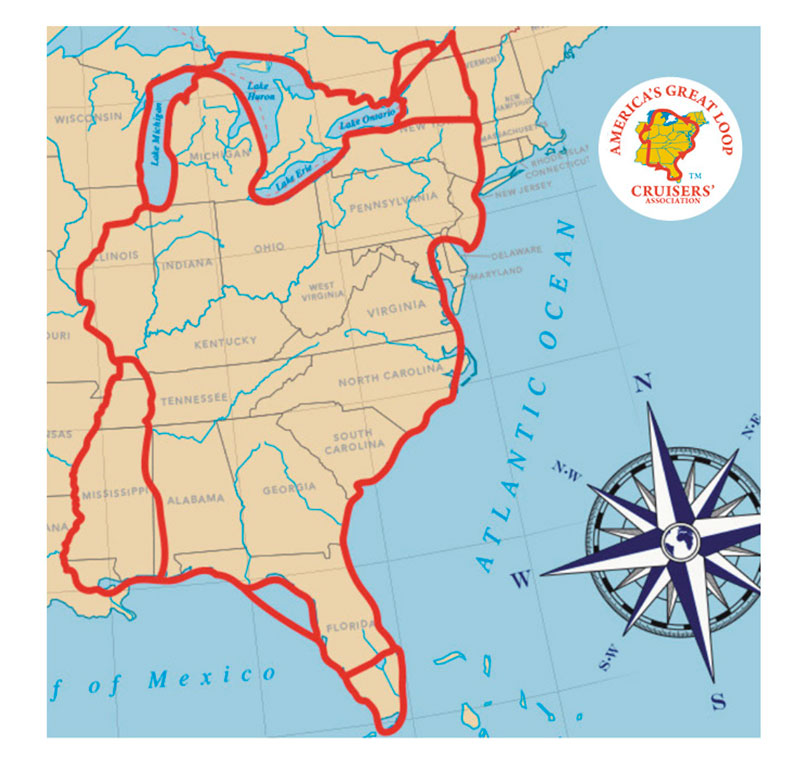 Tanya's six-month journey took her from North Carolina, up along the East Coast and through three of the Great Lakes, south along the Mississippi River to the Gulf of Mexico, around Florida, then back up the East Coast.

By April 2014, she was ready to depart. Armed with her boating experience, navigation charts, a tentative schedule with reservations at various marinas and plenty of advice from other people, she headed out of Southport, north into the Intercoastal Waterway.

“The next six months were filled with all kinds of challenges and opportunities,” she says. “I learned how to repair the engine; I survived strong storms and dense fog; and I took plenty of time to enjoy the journey.”

The trip included many one-night stays in marinas or on moorings, but she also had extended overnight stops just because she wanted to get to know more about the communities she passed by.

“I couldn’t imagine being in all these places without learning more about them,” she says. “The thrill of seeing the Statue of Liberty from a boat and cruising the Chicago river through the towering skyscrapers of downtown Chicago can’t be replicated.”

Asked about the challenges, she relayed several stories about negotiating the canals and locks.

“My toughest was in the Erie Canal. The lockmasters for the most part were helpful, but the pressure on me to manage my own vessel, tie off correctly and hold my own was pretty intense.” 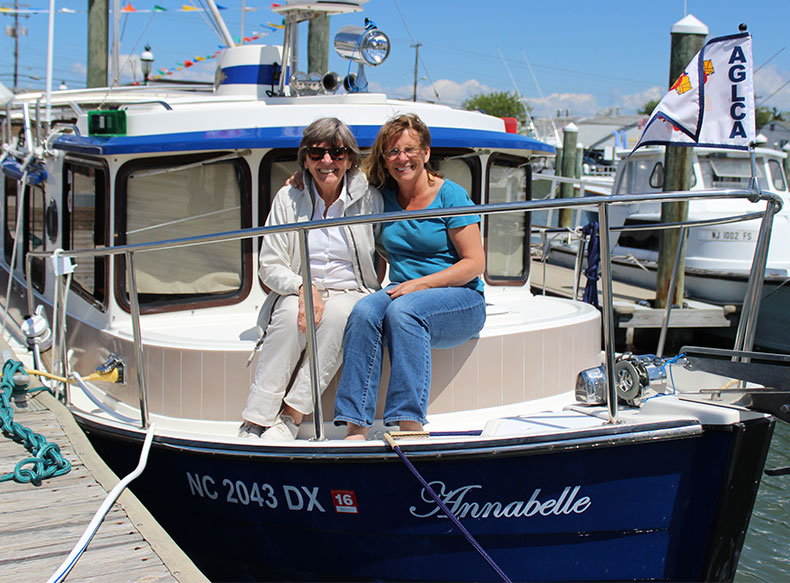 In November 2014, almost six months from the day she left, Tanya ‘crossed her wake,’ meaning she had come full circle and returned to Southport. She had earned the coveted gold flag awarded by the America’s Great Loop Cruisers Association to signify completion of the Loop.

Once home, she wrote the book “Crossing the Wake,” an account of her journey. She returned to work for a few more years, but last November, she retired to embark on her next adventure.

“I’ve sold everything and have my new canal barge waiting for me on the Saone River in France,” she says. There’s a longing in her voice. “I’d be there already, but with the pandemic I have to be patient. The positive is that the delay allows more time for French lessons. The wait will be so worth it to begin this next stage of my life, living in France and exploring the canals and rivers there.”

She adds: “I never would have dreamed my life would turn out this way.”

Visit greatloop.org to see an interactive map of the route followed by Tanya and other Loopers, and to learn more about America’s Great Loop. Her book is available at crossingthewake.com.