North Carolina historical plays are a tradition in themselves 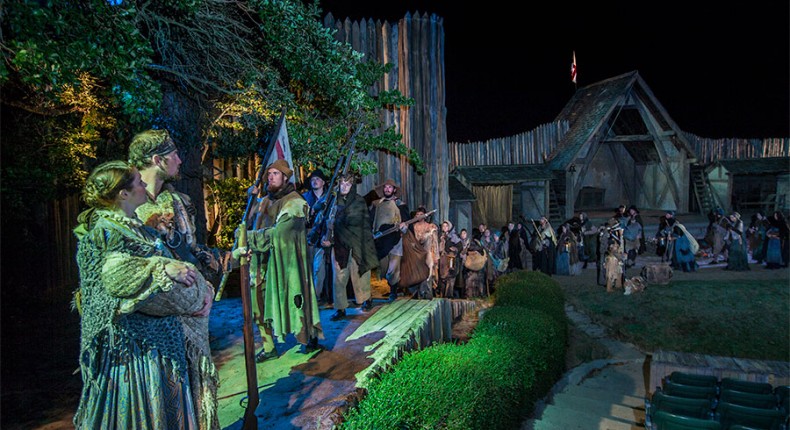 Faced with starvation and the imminent danger of a Spanish attack, the colonists set out into the wilderness in search of a new site for the settlement in "The Lost Colony." Photo by The Lost Colony.

Bill Coleman apologizes for the background noise. He is discussing “The Lost Colony” outdoor historical drama in Manteo over the phone.

“Today is the first day of rehearsals, and it’s the first time the choir’s members have sung together,” he explains as the sound of harmonious voices swells in the background, recreating music from the 1500s. “We have 19 days to get ready for opening night — learning lines, music and choreography, production cues, stage blocking and all that goes into a 75-performance season. It’s one of the closest things to a Broadway experience without being on Broadway.”

“The Lost Colony,” produced by the Roanoke Island Historical Association, has over 130 actors, technicians, designers and volunteers; costumes designed by Tony Award winner William Ivey Long; and is the longest-running historical symphonic drama in the United States.

“Summer theater is an excellent opportunity for aspiring and professional actors to hone their craft,” Bill says. “We had more than 200 people apply to us for acting positions, and then there were more than 800 people who auditioned at the Southeastern Theatre Conference this year for 30 to 40 productions, cruise ship shows and theme parks. These actors are some of the best in the country.” 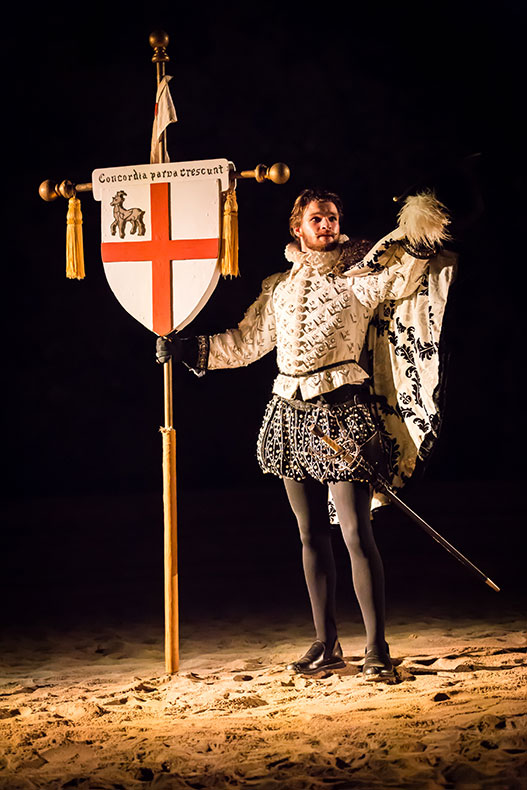 Sir Walter Raleigh raises the flag of the new Cittie of Raleigh and blesses the ships as they set sail for the New World in "The Lost Colony." Photo by The Lost Colony.

North Carolina is the birthplace of outdoor symphonic dramas in the United States. It started with playwright and North Carolina native Paul Green, who crafted “The Lost Colony” to tell the history of the first colony in the New World. The Broadway-style, full-blown outdoor stage production opened in 1937 and has since paved the way for similar productions across the country.

“As people began to take vacations in their automobiles in the 1920s, outdoor dramas became a destination for travel and a chance to be entertained,” says Cecelia Moore, university historian at UNC Chapel Hill. “Outdoor dramas were appealing because they were accessible, affordable and were good family entertainment. And these dramas were performed in the very places where the historical events happened.”

Green wrote a number of historical outdoor dramas, as well as scripts for plays and films. His “Cross and Sword” in St. Augustine, Florida, tells of Spain’s settlement of the nation’s oldest city. “Stephen Foster: The Musical” in Bardstown, Kentucky, showcases the music of the Kentucky native and composer, and Green's “Trumpet in the Land” in New Philadelphia, Ohio, recreates life in the frontier of Ohio during the Revolutionary War.

“Paul Green’s productions, filled with pageantry, spectacles, historical costumes, music, songs and dance, have inspired a number of symphonic dramas,” Cecelia says. “Many have come and gone over the years, but North Carolina is fortunate to have several that draw locals and visitors to towns across the state.” 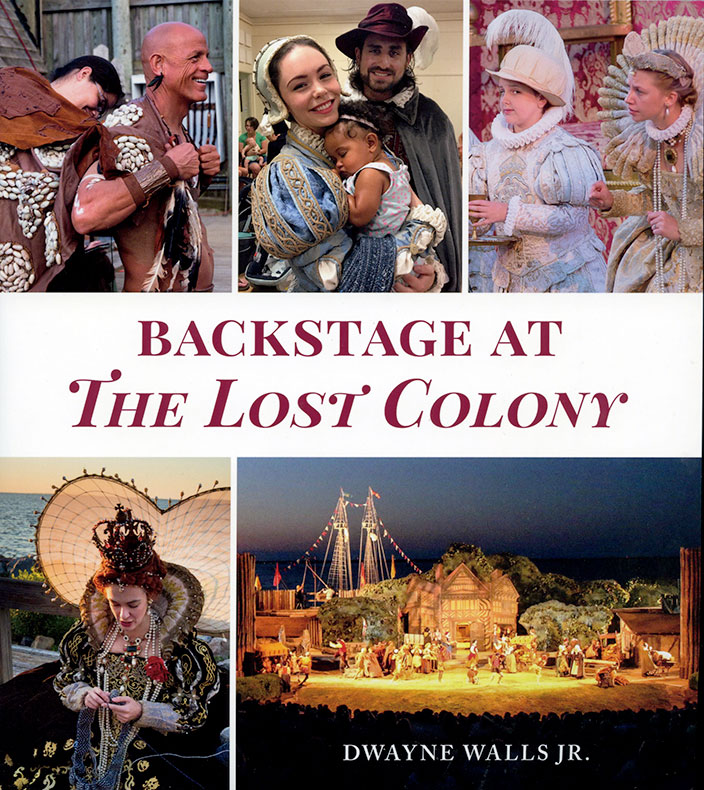 In “Backstage at The Lost Colony,” Pittsboro‑based author Dwayne Walls follows the cast and crew through The Lost Colony’s 80th production season. His observations are supplemented by colorful photos and first-person stories from production alumni — Dwayne himself first signed on with the production as a 19-year-old actor technician. Published in 2018 by Coquina Press. Softcover, $19.95.

Nearly a half-dozen productions take place in the state each summer; however, the work to produce, fund and present these dramas is a year-round commitment. Larger companies like “The Lost Colony” have full-time staff. Even so, the company offers educational programming for North Carolina schools to tie in with.

Others, such as “Unto These Hills” in Cherokee, “Horn in the West” in Boone and “From This Day Forward” in Valdese, have other sources of income beyond ticket sales for their summer production that may include managing an associated museum, presenting events throughout the year or crafting products for sale.

John Tissue is the executive director of the Cherokee Historical Association that produces “Unto These Hills,” which debuted in 1950.

“The association presents ‘Unto These Hills’ each summer, but the rest of the year, we have a touring company that travels to tell the story of the Eastern Band of Cherokee,” he says. “We also own the Oconaluftee Indian Village and are getting ready to open a retail shop to sell the hand-crafts that we produce.”

Over the years, “Unto These Hills” has undergone changes and updating. “We own the script so we are able to update the language from Kermit Hunter’s original so that the actors are speaking in contemporary English,” Tissue says. “And it’s important that we retain the legacy of ‘Unto These Hills’ and the story it tells, because it is still very relevant today.” 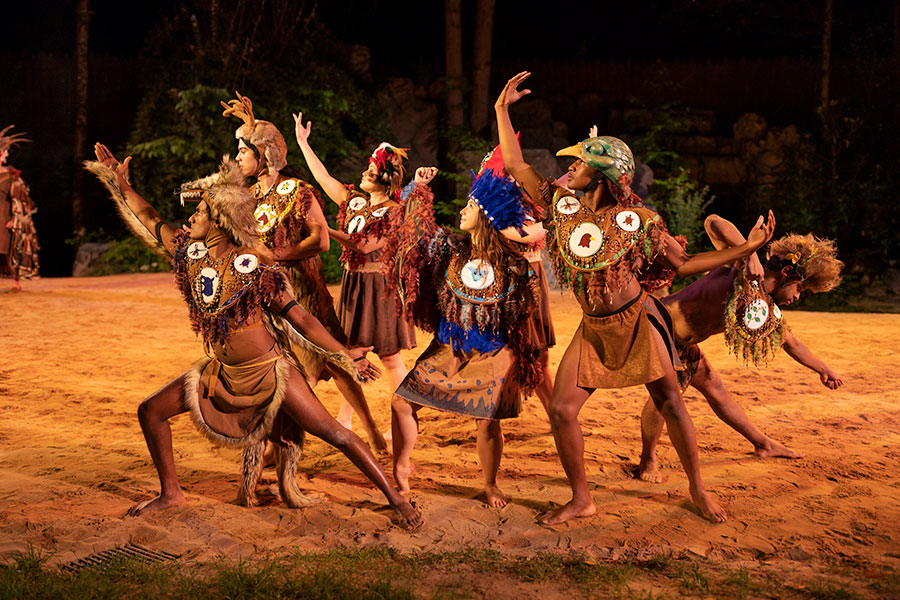 A modern interpretation of a traditional dance is featured in the stage production "Unto These Hills." Photo by Element Advertising.

Hunter also wrote Boone’s “Horn in the West,” which tells the story of the Revolutionary War with Daniel Boone at the center. Opened in 1952, “Horn in the West” is produced annually by the Southern Appalachian Historical Association.

Now in its 52nd year, “From This Day Forward” is one of six theatrical productions by the Old Colony Players in Valdese. As a year-round community theatre, it relies on ticket sales, grants, donations and sponsorships for funding. It also offers summer camps.

“We’re a 501(c)3 nonprofit organization, and we truly count on community support,” says general manager Edyth Pruitt. “And this area is filled with such a wealth of talented actors that they come out to perform because of their love of theater.” 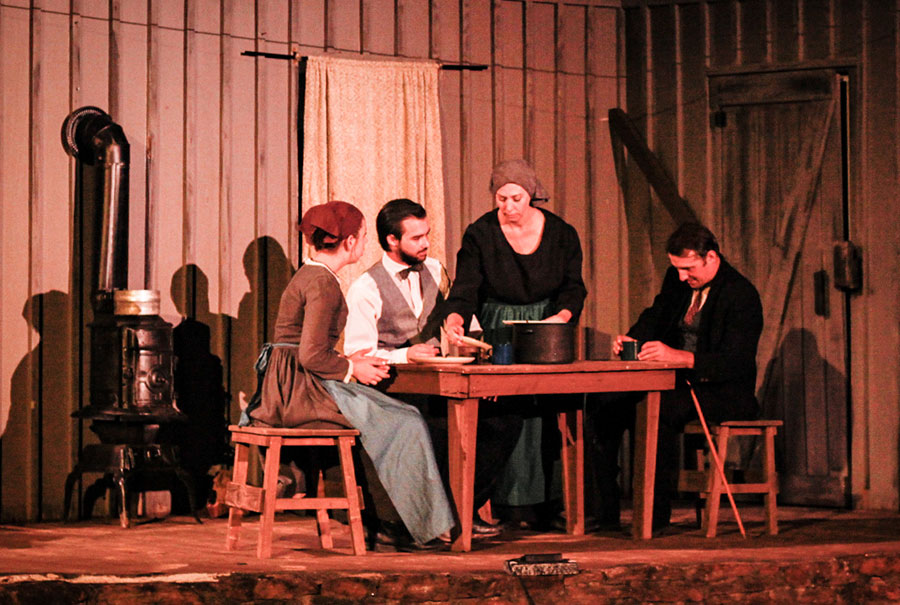 A family makes the difficult decision to emigrate from the Cortian Alps of Italy in "From This Day Forward." Photo by Old Colony Players.

Between 30 and 40 actors of all ages perform in the production. “We even have one actor who has been in the show for 43 years,” she says.

The show takes place in the Old Colony Players Amphitheatre that can seat as many as 400 people.

“People come to see our show from all over the country,” Edyth says. “Some of them have told us that they traveled the country with their families to visit outdoor dramas and now they’re doing so with their own children. It’s amazing.”

Showtime in the Open Air

Learn the story of the first English settlers in the New World and their struggles in the Outer Banks to make a life for themselves.

Witness the tragedy and triumph of the Cherokee people’s history leading up to the Trail of Tears, when many were forcibly removed from their homelands.

Horn in the West

A lover’s triangle becomes one of the country’s first publicized crimes of passion, made famous by the Kingston Trio’s ballad.

From This Day Forward

Experience the struggles and joys of the Waldenses as they leave their home in the Alps and come to North Carolina to found the town of Valdese and protect their religious freedom. 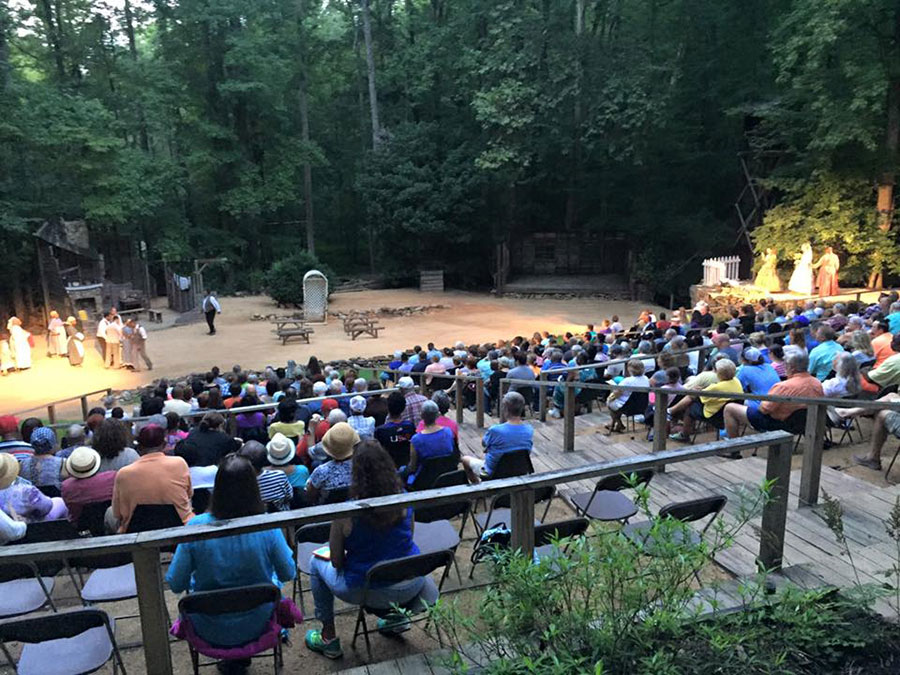 snowcampoutdoortheatre.com
This Piedmont outdoor venue is undergoing renovations in order to bring two historical dramas back to the stage: "The Sword of Peace," highlighting the struggles of peaceful Quakers during the Revolutionary War, and "Pathway to Freedom," an account of the Underground Railroad in North Carolina.