Follow the process of making sea salt, from salt house to farmers market, in a video tour of Sea Love with owner Amanda Jacobs.

Today, small companies are making sea salt from the waters off the coast, plugging into a trend for gourmet salts, which fans value for their mineral content, flavor and texture. 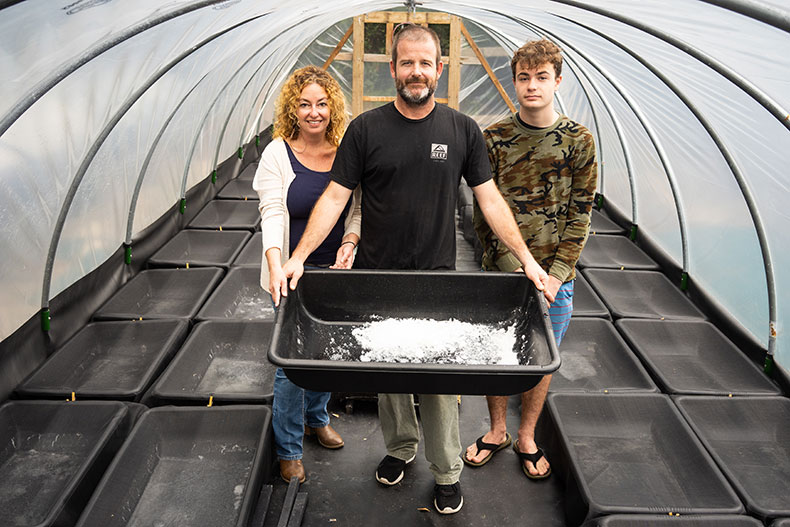 Shaena, Brian and Declan McMahon of Hatteras Saltworks show off the salty fruits of their labors.

There are two ways to get sea salt: boil seawater over high heat to evaporate the liquid and leave the salt behind, or employ the sun for solar evaporation, which takes longer but uses no fuel or electricity. Both Hatteras Saltworks in Buxton, served by Cape Hatteras Electric Cooperative (hatterassaltworks.com), and Sea Love Sea Salt near Wilmington (sealoveseasalt.com) use solar evaporation, where seawater is placed in solar ovens inside greenhouse-like structures. Time and the coast’s abundant sunshine do the rest of the work.

“Boiling is kind of like cheating. You’re using so many resources that you don’t have to use. And you’re boiling out all the good minerals,” says Amanda Jacobs, owner of Sea Love. “I prefer to do the natural method.”

It also works out better than Amanda’s first attempt at getting sea salt: baking seawater on low heat in her home oven. The salt made the metal walls corrode and peel.

Wherever we’ve lived, we’ve made salt. Nicaragua, the Caribbean. It tastes different and looks different around the world.

Brian McMahon of Hatteras Saltworks goes a step farther off the grid by using recycled wood to build frames for his solar ovens. A former navigator in the Coast Guard and avid surfer, Brian and his wife, Shaena, have long been interested in making salt.

“Wherever we’ve lived, we’ve made salt. Nicaragua, the Caribbean. It tastes different and looks different around the world,” he says. “We have the Labrador Current meeting the Gulf Stream off the coast here, and the circulation creates a lot of minerals. We’re sitting on a lot of minerals because of the dynamic.” 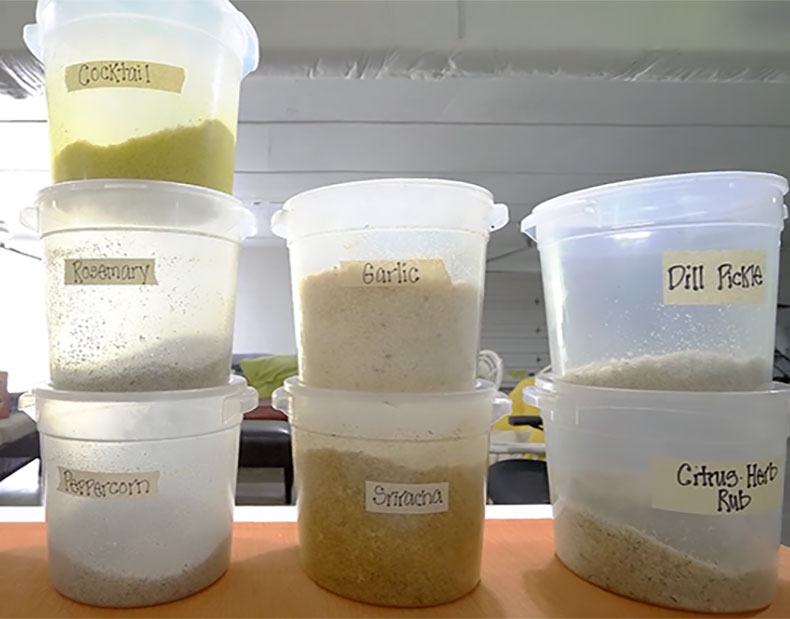 The solar evaporation process is similar for both companies. First, there’s the matter of getting a lot of seawater — one gallon will produce about 4 ounces of salt. Brian has a pipe and pump at a spot on the beach that sends the water into a container on his truck, which he drives back to tanks at the saltworks. Amanda scoops water by hand into 5-gallon buckets.

The seawater is filtered to remove sand and other impurities, then it goes into the solar ovens under glass. Depending on the weather, it can take three to four weeks for most of the moisture to evaporate. Then, the salt hangs in cheesecloth sacks for a few days to allow it to completely dry.

Part of sea salt’s appeal is its flaky texture, and each company leaves it in the coarse state, lightly grinding only to break up excessively large chunks before packaging. Chefs like the texture, and a number of restaurants, bakeries and even breweries around Wilmington use Amanda’s salt.

“They use it for the sour Gose beers,” Amanda says. “And One Belle Bakery makes a salt and pepper caramel glazed doughnut.” 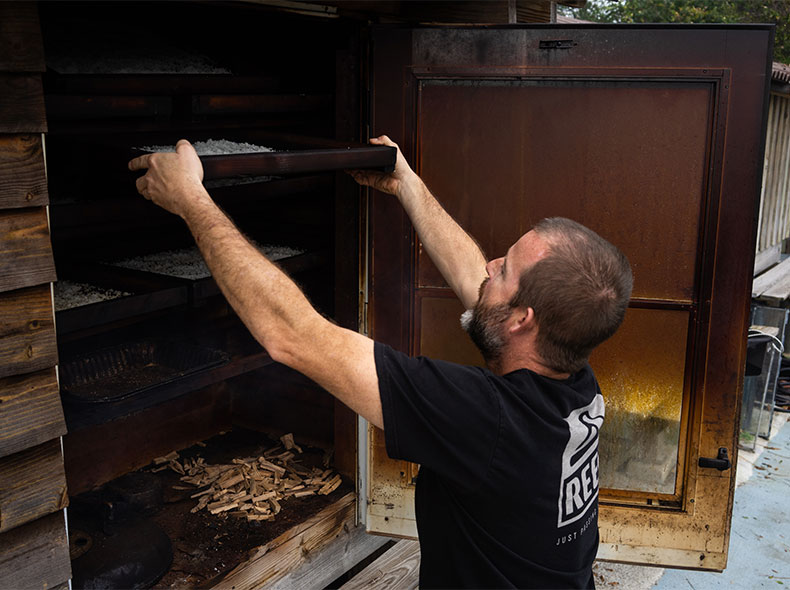 Brian McMahon removes a tray of Pecan Wood Sea Salt from a cold smoker made from recycled materials.

As for cooking with sea salts, they’re generally used as finishing salts, which are added after a dish is cooked for their flavor or texture, or their flaky appearance.

Flavored salts are a quick way to season a dish, and Hatteras Saltworks’ include rosemary, lavender and smoked pecan.
“The smoked pecan is good on desserts, ice cream or pretzels. The rosemary is fabulous on a steak right before you serve it,” Brian says. “Lavender is good on white chocolate and some seafood, the lighter fish.”

Sea Love’s flavors are rosemary, cracked peppercorn, garlic, truffle, Sriracha and citrus, which is popular for coating the rims of margaritas. Amanda is also a beekeeper, and once a year she makes salted honey, which customers use on a cheese platter or drizzle on sweet potato fries.

Flavors are nice, but Brian also enjoys the classic taste of salt from the sea. 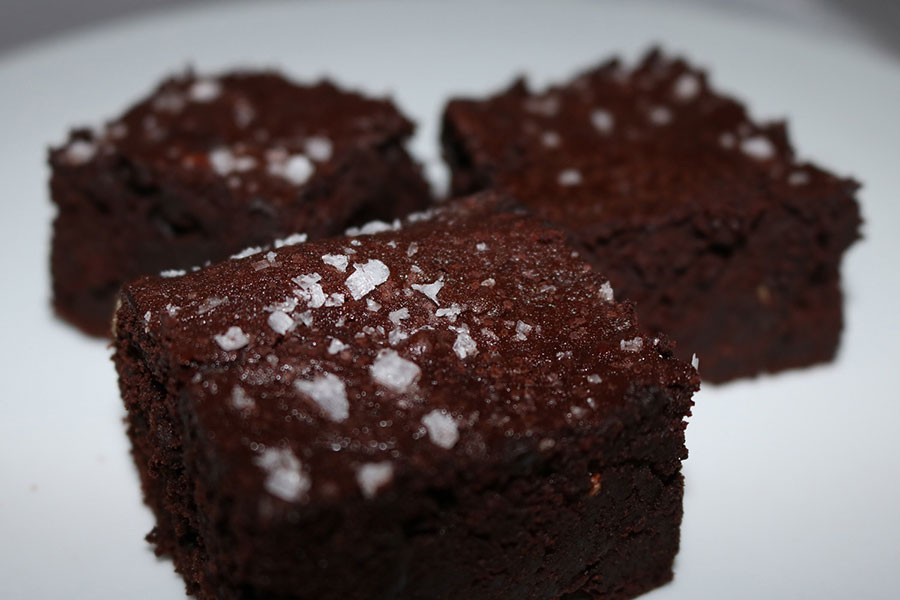 Got a savory craving?

Debbie Moose is a freelance writer and cookbook author in Raleigh whose newest book is “Carolina Catch: Cooking North Carolina Fish and Shellfish from Mountains to Coast.”